Arden Primary School grounds and buildings have changed many times and are still changing!  The school was built in 1970 to accommodate the 'overflow' from other local schools. It was built originally as a one form entry school.

Every school used to have a Log Book and Arden was no exception. This book recorded all of the major events of the school including which children were punished and for what! The first page can be read on the right.

The school was surrounded by houses and had a garage alongside the playground. Whenever classes went out for PE or playtime they would need extra balls to replace the ones lost on the roof of the building behind! There was an incident when a bull which was being transported escaped and found its way onto the playground. The children missed playtime, but were able to watch its capture.

Every school had a log book and Arden was no exception!
Staff v Children events 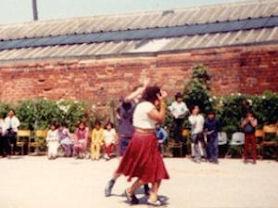 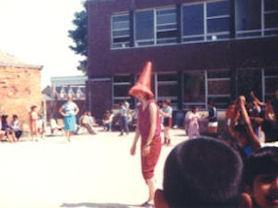 In the pictures above you can see the staff v pupils end-of-year rounders match. They were, and still are, events of enormous fun for all.

This part of the school has changed many times. It was our main playground, rounders, skittle ball, football and cricket pitches back in the 70s and 80s.

These children are playing near the schools entrance in St Johns Road. There were no uniforms to wear at this time! The houses in the background were demolished to make way for some new semi-detached houses soon after this photograph was taken.

Mr Lamb and then Mrs Garland were the Headteachers at this time.

The intake of the school remained the same until 1982, when there was a great shortfall in school places locally.

The houses surrounding the school were demolished and the Warwick road was widened. The school then had an intake of 90 children for three years, followed by 70 children for four years. Extra portable classrooms were delivered each year.

Playing near the old entrance

Summer Camp has always played an important part of the school calendar.

These photos were taken by Mr Jones at Earlswood in June 1982. 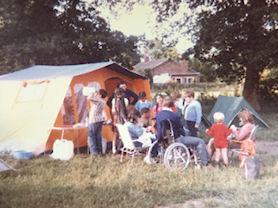 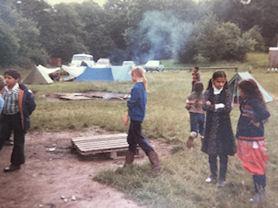 At the start of 2001 we had three huge playgrounds. But that was soon to end as work started on a permanent two-storey building that was going to replace the outside classrooms. Work was finished early in April 2002. Mr Lambert was the Headteacher at this time.

April 2002 saw the removal of seven of the eight huts. All the classes were in proper classrooms, except the Nursery and Mrs Seeley. Shame...

A new library was 'suspended' above the old one in Easter 2004. The ICT suite moved out of the corridor into the old library. The day the new ICT suite and Library opened Mr Lambert told staff that the school was to undergo building work that would expand the school to a three form entry Primary school. The new library and ICT suite were temporary buildings after all!

In 2006, a four year rebuild process began. Mrs Owen was the Headteacher at the start of developments. Then, Mr Lacey became the Head and took on the task of managing the next stage in rebuilding Arden School.

During the Summer holidays, work to extend the playground and provide parking spaces for teachers and visitors and provide safe, pedestrian access to the school could begin

Since 2008 and moving into our new building Arden has continued to develop and grow. We are now a thriving three form entry school with our 700 children on site, undertaking a broad and balanced curriculum aimed at enhancing the learning of all of our children.

In July 2017 we said a sad farewell to Mr Lacey, our Headteacher, who had seen us through the expansion of Arden, but his legacy is still very much with us.

Arden has changed so much, from a one form entry school surrounded by Victorian houses in the 1970s to the building you can see pictures of on this website.

One thing fortunately hasn’t changed. Arden’s children have always been, (whichever building they have been taught in) wonderful, enthusiastic, helpful, polite and a pleasure to teach.

One Man We Cannot Forget!

Mr Jack Rivitt who lived on St John’s Road Sparkhill was the Chair of Governors of the school from its opening in 1974 right up to 2005.

In addition to this he received a special award from the Queen in the year 2000 which was a MBE (Member of the British Empire) for services to the community in Sparkhill, Birmingham.

Jack was a real friend to the school. He passed away in August 2012 after a period of ill health and the school held an event to celebrate his life and contribution to the school.

Mr Rivitt, our first Chair of Governors and a true friend of Arden

Class 3K in 1997/98. One of Mrs Fox’s (Miss Reid) first classes at Arden took part in an activity with their parents to develop their understanding of Road Safety. The project was funded by the Parent Partnership Community Project. Mrs Rana also helped to deliver the project in the old caretaker’s house.